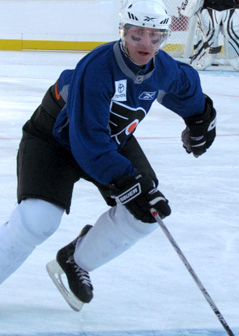 Dr. Len Ellis, a native of Allentown, Pennsylvania, adopted the South Jersey area as a teenager, returning here every year as a hockey counselor for the Philadelphia Flyers summer camps.

Inspired by his childhood orthodontist, he started his practice from scratch in the Marlton/Mt. Laurel area in 1997 after graduating from New York University College of Dentistry’s orthodontic residency program.

Dr. Ellis is a skilled, board-certified practitioner who is passionate about orthodontics. His practice is founded on building lifelong relationships with his patients and their families. He treats a wide variety of patients, from children to adults, and is a Premier Platinum Provider for Invisalign®.

Dr. Ellis also has a mentoring program in his office for teens who wish to pursue a career in orthodontics. He supports many local and national charities, as well as many patients’ sports teams and activities.

He has received several clinical awards and numerous other awards, including the prestigious President’s Service Award for leadership and NYU’s Class of ’49 Hyman J. Schorr award for sincerity and helpfulness. He is also on the faculty of NYU. He has been voted top orthodontist in SJ and South Jersey Magazine every year since 2007.

Dr. Ellis resides in Marlton with his wife Rita and their two sons, Jack and Luke. He continues to play hockey and currently plays for the Flyers Alumni team. He also enjoys skiing, golf, and coaching his boys hockey and lacrosse teams.